The World of Charles Atlas!


The very first Charles Atlas website on the internet, online since 1996!

Charles Atlas burst upon U.S shores in 1903. He was a spindly ten year old boy from Italy named Angelo Siciliano who arrived at Ellis Island along with thousands of other immigrants.

As a youth, he was often beaten-up and attacked by bullies.

By the time he was seventeen, he had developed his “Dynamic Tension” total-fitness method after watching a lion at the zoo.  He realized that the lion’s apparent stretches were in reality powerful muscle development exercises.

He then used this very same method to transform himself from a 97 pound weakling into the most physically advanced human specimen that mankind had ever seen.

In the nineteen-teens, he entered various fitness competitions and modeled for artists.

In 1922, he won the “Most Perfectly Developed Man” contest at Madison Square Garden and changed his name to Charles Atlas.

Plans for any further competions were immediately cancelled with the explanation, “What’s the use of holding them? Atlas will win every time.”

Due to overwhelming demand, Charles Atlas published his total fitness and health course in 1924.  In 1928 he met Madison Avenue advertising executive Charles Roman.  Together, they founded Charles Atlas Ltd and offered the program with that now famous “kicking that sand in our faces” campaign.  Within months they were both millionaires and Charles Atlas Ltd had offices all over the world.

Their company did so well, that when the stock market crashed on Black Tuesday, October 29, 1929 (instantly rendering countless other millionaires paupers) they were both unaffected by it.

From the 1920s through the 1960s, Charles Atlas was a media superstar.  He appeared in countless magazines, news shows, and newspapers almost daily.  Millions of his students worldwide improved themselves using his complete “Dynamic-Tension” fitness and health program.

He was renowned for performing many astounding feats of strength and heroism.  During a storm, he saved the occupants of a rowboat that was floundering a mile off the New York shore.  He swam out to it and discovered that the occupants of the boat had lost their oars.  He tied a rope that was attached to the boat around his waist and then swam back to shore, towing the boat behind him.

In the 1950s, the AMA approved of and enthusiastically endorsed his course in “Dynamic-Tension”.

His measurements are on permanent file as the perfect human specimen.

In 1982, his biography, Yours in Perfect Manhood, was published.  “Yours in perfect manhood,” is one of Mr Atlas’ distinctive phrases that he uses when signing letters to his many fans.  This book is currently out of print, but it may be available from Amazon.com.

Today, his course is still offered, and he continues to help millions of people all over the globe.

“Nobody picks on a strong man.” — Charles Atlas 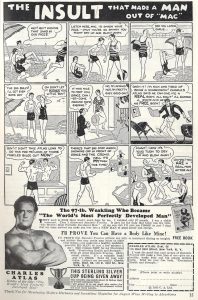 The World of Charles Atlas!